Welcome to the NZcha Check out our latest news and events.

28/7/22 - 🐮 New Non Pro Class introduced – Limited Non-Pro:
Open to New Zealand Non-Professionals with lifetime earnings in non-professional events of $2,500 or less excluding all age and restricted earnings as determined by the records of the NZCHA.
(To check your eligibility- please check the July Chatter for LTE).

🐮New Snaffle Bit Youth Class
(Clubs to trial 2022-23 – No National awards will be awarded).
Ruling: The YOUTH SNAFFLE BIT is a one- or two-handed contest, open to competitors who are age 18 years or under as at the 1st May of the competition year. Youth Snaffle bit points are accumulated at all shows which have Youth Snaffle Bit Events during the competition year. Youth MUST wear helmets at NZCHA affiliated events. A competitor may borrow a horse and may pay a day fee to compete. A competitor riding in Youth Snaffle Bit may not compete in a one-handed contest at the same show with exception of Youth (one handed). Twisted wire snaffles, gag snaffles and short shanked snaffles shall not be used. Snaffle bits are to be a minimum of 10mm (3/8”) and have a smooth single jointed mouthpiece. Bosals and Hackamores may be used. They shall be of rope or braided rawhide and have no Metal Parts.
A competitor entered in the Youth Snaffle Bit event may only enter one other Snaffle Bit event at the same show.

Born in 2010, a Quarter Horse chestnut gelding by Docs Durack (Imp) out of War Belle by Colonels Pep (Imp).
Bred and owned by Colin & Helen Holmes, trained and ridden by Colin.

⭐️ The story behind All Fyred Up is very special to us and the reason for his paddock name Nolan and his AQHA-NZ registered name A few weeks before our friend Nolan Fyres died we sent him a picture of our roan yearling colt Peptos Do Rock. Nolan’s daughter Kim got back to us saying that Nolan had always wanted a roan horse. So a plan was set in motion that we would have one of Nolan’s mares to breed to PDR and we could use her to breed from until we were breeding with PDR. How fortunate were we, unbeknown by us then, that by having a mare by Colonels Pep, the stallion Nolan Fyers had imported, we were acquiring amazing bloodlines in that Colonels Peps full sister Colonels Destiny is now an NCHA Australia Hall of Fame inductee. Combined with Docs Duracks genetics the stars must of been aligned for Nolan.

⭐️ So in 2009 War Belle went to Docs Durack and the story of Nolan started. (to add to this story Warbelle did produce a roan filly by PDR for Kim)
Nolan is a nondescript gentle horse with a few quirks but in front of a cow he is strong, very cow related in what he does and has more than enough ability to control a cow with big stops and agile movement with lots of eye appeal.

⭐️ If he has one fault it would be in the warmup pen when occasionally he will “lie” to Colin and in the show pen he will be too cow fresh and pig root across the pen but he will stay cutting and settle into his work.

Nolans career started at the 2014 NZCHA Futurity and since then his highlights have been:

And now the honour of being in the NZCHA Horses Hall of Fame and as he is only 11 years old as this is written, we hopefully can look forward to more of his achievements.

Photos were produced by Helen of Holmes Cutting Horse Photography 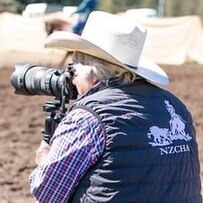 On behalf of the New Zealand Cutting Horse Association a, thank you for your interest in one of the most exciting equine sports in the world. It is the NZCHA’s mission to promote and encourage the breeding and exhibition of Cutting Horses.
​We intend to promote and grow the sport of "Cutting" in New Zealand.
If you:
- Love horses,
-Enjoy watching or riding a highly trained intelligent equine,
- Enjoy team sports, where the whole family can be involved,
Then "Cutting" could be for you.

This site can provide you with information regarding shows and special events, where your local club is, who to contact and much more.
The NZCHA is the governing body of this equine sport in New Zealand. We are  affiliated to the NCHA (Australia) who publish the Rule Book that we follow (with amendments to suit our local conditions).
Please let us know if we can be of service to you.
Enjoy the cut!

Cutting is a western-style equestrian competition in which a horse and rider work together before a judge or panel of judges to demonstrate the horse's athleticism and ability to handle cattle. Modern competition utilizes a ​2 1⁄2 minute performance, called a "run." Each contestant is assisted by four helpers: two are designated as turn-back riders, who help to keep cattle from running off to the back of the arena, the other two are designated as herd holders to keep the cattle bunched together and prevent potential strays from escaping into the work area. Cutting cattle are typically young steers and heifers that customarily range in size from 180 to 290 kg. They usually are of Angus or Hereford lineage though may be a mix of Crossbred beef cattle, including Charolais or Brahman lineage.
A contestant is required to make at least two cuts from the herd, one of which must be a cut from deep inside the herd while the other(s) can be peeled from the edges. Once the selected cow has been driven clear of the herd, the contestant commits the horse by dropping the rein hand to feed slack and give the horse its head. At that point, it is almost entirely up to the horse except for allowable leg cues from the rider to prevent the cow from returning to the herd; a job the best horses do with relish, savvy, and style.
Cutting dates back to a time when ranchers in the American West hired cowboys to work herds of cattle out on the open range. Certain horses specialised in sorting and separating individual cattle from the herd when needed. Cutting moved from the open range to modern arena competition, often held indoors. Some sanctioned events at the international level offer added million dollar purses.
Cutting horse competition is primarily governed by the rules and regulations established by the New Zealand Cutting Horse Association which is an affiliate of the NCHA - Australia.

Competition divisions common in cutting are:
Terminology Used:
Back fence: An area of the fence behind the cattle. A horse is penalized 3 points each time the cow being worked stops or turns within 3 feet of the back fence.
Baldy: a cow with a large white marking or "bonnet" covering the face.
Blow up: When a horse or cow panics.
Brindle: A cow with a mottled coat colour.
Cheat: A horse that looks for an easy way out of working correctly.
Collected: A horse that is balanced under the rider so that it can quickly respond to the moves of a cow.
Commit: Show intention to work a specific cow by looking at it and stepping towards it.
Cut for shape: When a rider selects a cow on the edge of the herd rather than riding through the herd and driving a cow out.
Deep cut: To select a cow from well within the herd, not from the edge of the herd. Under NZCHA rules, the cutter must make at least one deep cut per run.
Draw cattle: A horse's ability to make cows look at them and come towards them.
Drop on a cow: Crouching posture of the horse when a cow has been cut and separated and the rider drops his rein hand on the horse's neck.
Dry work: Basic cutting horse training done without the use of cattle also known as flat work.
Frosted: a cow with white markings on the tips of the ears.
Heading a cow: Occurs when a rider places a horse in front of a cow in order to stop the cow or to force it to change directions.
Herd holder: One of two riders positioned on each side of the herd to help the cutter make his cut and to keep the herd grouped while the cutter works. They help to control the majority of the cattle so the rider can focus on the single cow they are trying to separate from the herd.
Mott: A cow with multiple colours on the face.
Sweep: The horse sits back on its rear end and moves its front end, front legs extended, with a cow.
Powered by